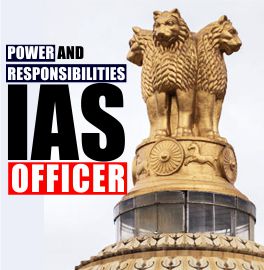 Do you dream to be an IAS Officer? If yes, you must have read our previous article on the “Perks and Privileges of an IAS Officer”. In this article, we bring you a detailed analysis of the Powers of being an IAS Officer (that certainly you’ll enjoy in some time) – An Overview by Best Coaching Institute in Udaipur.

RESPONSIBILITIES OF AN IAS OFFICER

Being an IAS Officer brings so much responsibility on your shoulders. These responsibilities vary from Department-to-Department and Division-to-Division.

Let’s discuss their responsibilities at such levels:

POWER OF AN IAS OFFICER

Code of Criminal Procedure (1973) of the Indian Penal Code (IPC), National Disaster Management Act, Arms Act, Drug License Act and Essential Commodities Act are some major Acts that list out the powers of an IAS officer.  Above all information received from Best Coaching Institute in Udaipur

As we always said, “Their powers, perks, and privileges are many, but their responsibilities outweighed them by much”.

Team Anushka IAS, Best Coaching Institute in Udaipur, wish you all the best in your exam preparation!!